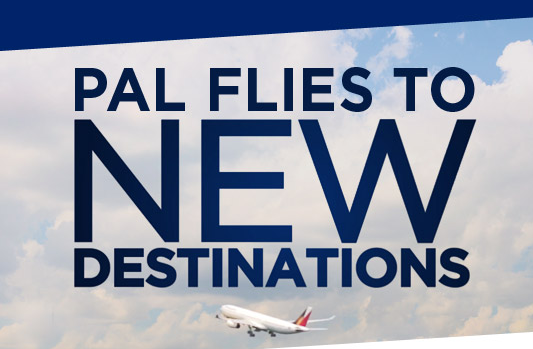 PAL President and Chief Operating Officer Jaime J. Bautista said, “The new routes will allow PAL to cater to the travel needs of both business and leisure travelers and OFWs, while offering PAL’s distinct brand of service marked by Filipino warmth, charm, and hospitality.  It will also help build tourism for the Philippines from new international markets.

“Upon arrival in Manila, passengers may enjoy what the capital city has to offer before connecting to any of the 30 domestic  and 38 other international  destinations  offered by PAL” he added.
Earlier this year, prior to launching flights to these destinations, PAL has also launched its services to New York (USA),  Quangzhou (China), Tablas (Romblon) and opened new interisland flights in Visayas and Mindanao.  PAL also reintroduced its Business class service to Cebu and Davao.
PAL has also launched the MyPAL App, powered by PayMaya Business and MasterCard, to make flying with PAL much easier for its customers.  Now, users can enjoy the convenience of booking their flights, checking-in online, and viewing their flight status using their Android smartphones.

PAL has been the country’s only full-service legacy carrier over the last seven decades. It is best known for its distinct brand of inflight service, marked by Filipino warmth, care and hospitality. Now on its 74th year, the flag carrier is focused on fleet modernization, route network expansion and service.